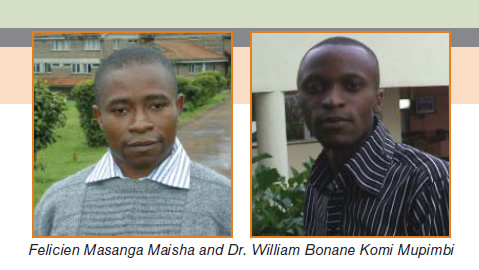 History of the Agency:

HEAL Africa is a faith-based organization operating in Eastern Democratic Republic of the Congo (DRC). Eastern
DRC is characterized by extreme violence, mass population displacements, and a collapse of public health services. Since 2003, the organization has worked with local communities and has encouraged local leadership through an initiative called Nehemiah committee—a group of local community leaders who initiate small, important projects within the community.

Objective: to mobilize 50 community leaders in HIV/AIDS prevention in 10 villages of Masisi and Rutshuru health zone by June 2008.

Maisha states, “Dealing with the CHIP is dealing with the community. It’s useful to plan an activity that will respond to a real need of the community. The implementation of the HEAL Africa CHIP is now on stage five of our action plan. But the Rutshuru community leaders were mobilized last February instead of Masisi’s leaders. Masisi is…the headquarters of the great rebellion movement CNDP and it’s not safe to reach the region.

Twenty-nine community leaders were trained about HIV/AIDS prevention, the fight against discrimination oriented to PLWHIV, [and] how to live positively with HIV/AIDS in the community.”

Using MDI frameworks, Maisha and Bonane developed another CHIP. “From discussion when implementing this CHIP,” Maisha recalls, “we learned that people were ready to use PMTCT (Prevention of Mother-To-Child Transmission) services for preventing HIV to reach the next generation.”

“PMTCT Program in Rutshuru and Kayna”

Objective: to expand PMTCT services to two regions by February 2009. Rutshuru health zone is 70 km north of Goma; Kayna has six health centers and is150km north of Goma. Women in these areas have very high fertility rates. HEAL Africa also hoped to offer PMTCT services in its hospital at the organization’s headquarters in Goma.

Some of the challenges HEAL Africa has faced in its second CHIP are low involvement of male partners in the PMTCT program and high insecurity in some areas.

As Maisha reflects, “On planning the CHIP we thought it could be easier to implement it as we know quite well the region and the stakeholders…. We learned that it’s good to explain much about what you want to do to all stakeholders in order to have their attention, even their help, which you need to achieve your goal. The good implementation of the CHIP demands patience and a good collaboration with all stakeholders. We have to give special attention to the people who will benefit from the advantages of the CHIP. The CHIP was and continues to be a good experience for us and for this we understand why AMREF and UCLA Anderson School of Management attached high importance to [the] CHIP.”

“The MDI program is a results based management Course that has greatly enhanced my management skills and ability to effectively organize the couple counseling and testing campaign.”
– Lulu Henry Jeku
“Our participation on the MDI was very timely as we were just embarking on starting our clinic that would place children on treatment and care through the provision of ART and what we learnt was the bedrock of our achievements to date.”
– Dr. Gordon Odundo and Judy Maye
“Dealing with the CHIP is dealing with the community.”
- Felicien Maisha