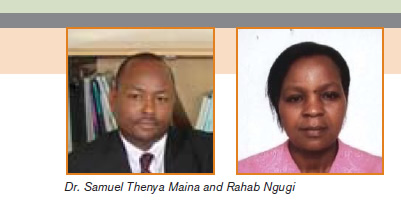 History of the Agency:

The Nairobi Women’s Hospital was started in 2001 by Dr. Sam Thenya. The organization has come a long way and has gone from serving one patient to hundreds daily. In 2005, a strategic planning team began transforming the hospital into a not-for-profit institution. In 2006, the hospital established a Board of Directors and completed a strategic planning and feasibility report. That October, the City Council of Nairobi donated property to the Nairobi Women and Children’s Hospital Foundation, and construction for hospital expansion began in 2007.

NWH’s mission is to build a sustainable and profitable healthcare organization in East Africa by providing value for its patients, doctors, employees and stakeholders. Although NWH specializes in obstetrics and gynecology, it also serves patients with other medical and surgical conditions requiring specialized care.

NWH management recognized the unmet need in East Africa for community health worker training in sexual and gender-based violence (SGBV). As it scaled up its patient services, NWH took on the challenge of implementing a program to address SGBV and build capacity in the health sector. Their objective was to train 360 health workers and sexual and gender violence management by April 2008.

After returning from the MDI, Dr. Thenya and Ngugi presented the CHIP to relevant hospital managers and trainers. CHIP activities then included reviewing training materials and training Nairobi Women’s Hospital and community health workers on SGBV. Because this CHIP was not originally part of NWH’s programs, the hospital had to actively seek resources such as facilitator’s fees, a venue for the training, training materials and reference
manuals, facilitators, and transportation and accommodation for the trainers. In order to make the program a success, funding was critical, so Dr. Thenya and Ngugi’s CHIP also examined how to fund the program both with internal and external sources.

Ngugi highlighted “the importance of getting the organization to support and buy-in to the project” as a key catalyst for internal restructuring. Although institutional buy-in was not a problem and the hospital staff was supportive of the trainings, NWH faced external issues like unpredictable funding, donor restrictions, and competition for similar programs from the Kenyan government and NGOs. Ngugi emphasized “working with other departments, the need to be focused, [and the] need to select the donor likely to sponsor training carefully” as factors that helped NWH succeed.

NWH also emphasized the need for training-needs assessments and record-keeping to make both pre- and post-program assessment more rigorous. As Ngugi described, “Monitoring and evaluation and technical support for all trainees…enabled me to evaluate whether objectives had been met and guided me in improving training activities.” Sound monitoring and evaluation systems, in turn, helped NWH be accountable for funds and submit comprehensive and timely reports to donors.

In addition to improving its training program, NWH also sent additional managers, Lucy Kiama and Ketra Muhombe, to the MDI to strengthen other areas of the hospital.

“The MDI program is a results based management Course that has greatly enhanced my management skills and ability to effectively organize the couple counseling and testing campaign.”
– Lulu Henry Jeku
“Our participation on the MDI was very timely as we were just embarking on starting our clinic that would place children on treatment and care through the provision of ART and what we learnt was the bedrock of our achievements to date.”
– Dr. Gordon Odundo and Judy Maye
“Dealing with the CHIP is dealing with the community.”
- Felicien Maisha